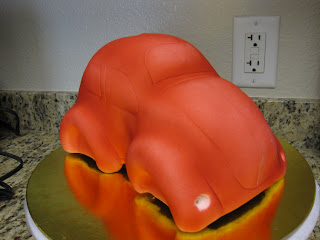 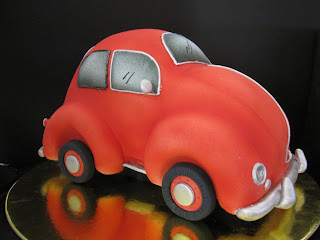 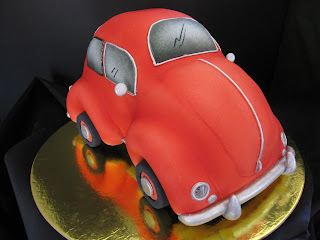 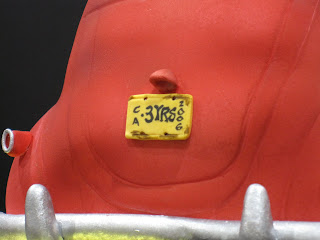 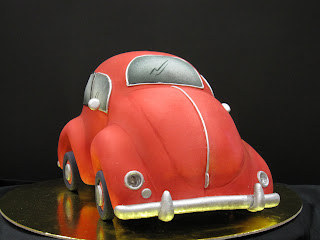 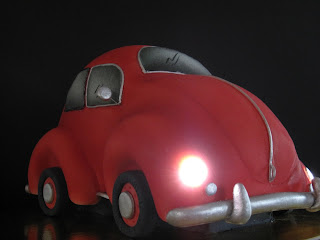 I've had my fair share of decorating different shapes of cakes from ovals to Mickey Mouse to 3D teddy bears. But they were mostly shaped out of Wilton molds. These days I've been checking out the works of great cake decorators out there and most of them carve their cakes. I've done one - a train - for a baby shower last April which I shall post soon. I've been dying to make a 3D car cake since I've never done one and finally got a chance when we were about to move temporarily to my mom's place.
I had a couple of leftover cakes in the freezer: one 8x8 and a small rectangular the size of which I don't even know since I rarely use that pan. I didn't want to have to transport the cake to my mom's house too so I TRIED to work quick between tending to Izzie, packing and cooking. TRIED because I failed to finish the cake! I worked on most of it before we moved but I just couldn't get it done. So sad to say, no one was able to enjoy the cake. I still wanted to work on it though for the purpose of practice. I even got hubby to work on it with me!
This cake isn't perfect at all. It's not as clean as I want it to be but for practice and a first try, I think it's decent enough to share to everyone. My hands were so shaky and was such in a rush that I didn't realize till after our move that my windows aren't even aligned! One thing that made me want to get this done quic--the headlights. I've been watching too much Ace of Cakes lately that I decided to add a little extra to this cake Duff Goldman style. We first sacrificed a little piggy keychain whose eyes light up when pressed. We got a little better after a few tries. Bought some wires, batteries, LED lights and a toggle switch to turn the lights on and off. While doing this I told myself: I wish I had paid more attention in Science class before! Luckily I have my hubby to thank.
I finished the cake the day before our 3rd year anniversary so I decided to incorporate it into the cake. On the license plate it says CA which is where we got married, 3 yrs, and 2006 which is the year we got married. Happy Anniversary Hon! Thanks for helping me make this cake :) Mwah!
Posted by Pastrychik at 12:26 AM 3 comments: 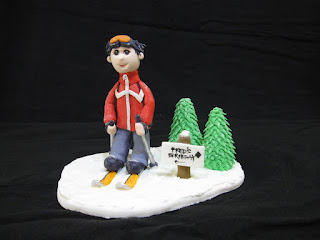 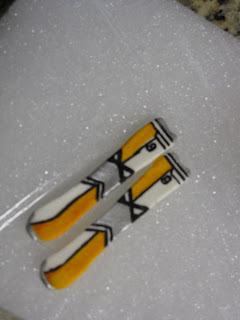 My uncle requested a Tres Leches cake for his birthday. I usually garnish the cake with strawberries but this time I wanted to do something a little different. Since the frosting is white, I decided to go with one of his favorite sports - skiing.
I decided to practice on my figures. I was a little worried to start since it will be my first time making a figure standing. So have a few boo-boos here. "Uncle Fred" is a little bent since I didn't support his legs plus my hubby knocked it off by accident. Didn't have time to do another one so I decided to go with it. Good thing he's skiing! I know better next time. It's decent I think. I see a little bit of an improvement on the face but I still need more practice. I guess there's always next time! :)
Posted by Pastrychik at 12:10 AM No comments: 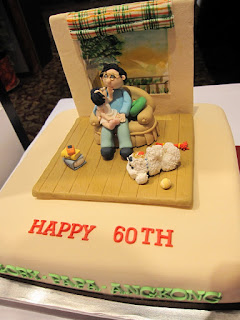 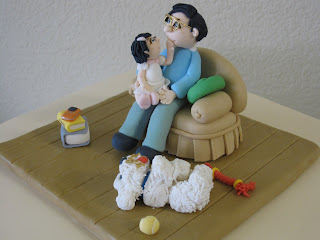 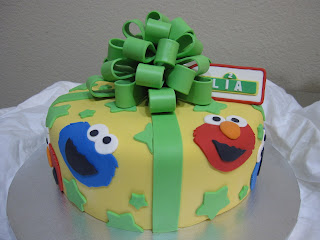 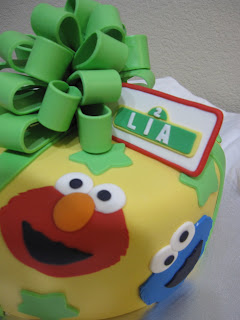 April's always a busy month for me because my parents come visit. It was extra busy this month because I had to do 3 cakes on top of the daily house chores and tending to a 19 month old on her terrible twos stage. Made 1 for my dad, 1 for my sister (the tennis bag in my previous post) and another for a friend's daughter turning 2.
My Dad's Cake : set up based on my parent's house (thanks to my sister who helped me paint the scenery, my sister's dog Rusty, my dad's mobile phone and his favorite books (guns and cars). It was is big 60th birthday so I decided to do something more than his favorite Tres Leches cake. I've done gumpaste animals before but it's my first time making people figures and I was quite happy with how it looked. I could do better I know but I guess it's good for a first try :)
Sesame Street Gift Box: inspired by a cake I saw on flickr.com awhile back. The mom of the little girl wanted the street sign on the cake so I decided to have it as a gift tag.
Posted by Pastrychik at 11:34 PM 2 comments: 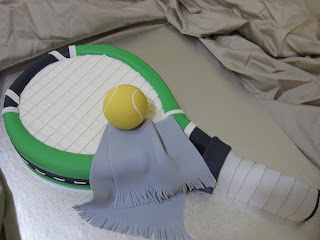 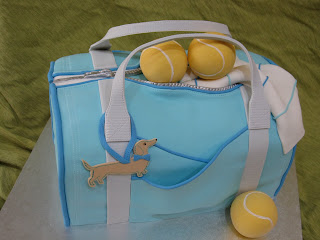 While I have the time, I'm posting a couple of cakes both tennis in theme.
The tennis bag I made for my sister's 30th birthday. It's my 1st bag cake and I'm pretty happy with it though I know I could have done more. She loves blue hence the color and daschunds hence the bag tag (she actually has the same exact tag). This cake was also the thickest cake I've made - 6 inches high - 3 layers: two layers of my mom's famous chocolate cake and one layer of butter cake as requested by my sister, vanilla buttercream filling. Made the tennis balls out of rice krispies. It's my 1st time working with rice krispies and had trouble getting the fondant to stick at the start and not having the krispies bump but after a couple of tries, it all worked out.
The tennis racket I made for a friend's hubby who likes the color green and play tennis of course. Carved the cake out of a 9x13 cake. Again, chocolate cake (everyone just loves this).
Happy viewing!
Posted by Pastrychik at 11:25 PM No comments: 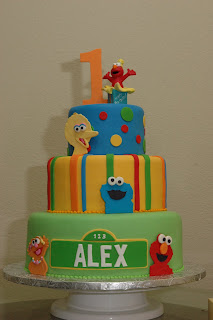 My sister urged me to start this blog to share to everyone my sweet works of art. I'm a little hesitant since I feel I'm so behind amongst the great cake decorators out there. I did start when I was 15 with Wilton cakes (back then it was a new thing, but note: I'm not that old haha!) but stopped in between for a good almost 9 years. I'm trying to catch up but it's going to take me awhile being a full-time mom with a 19 month old. A cake that I can do in a day now takes me 2 days to get done!
Here is one to start. The first cake I've done this year. It's for a good friend's daughter who turned 1 last January. Chocolate cake with buttercream filling. Characters made of gumpaste.
Posted by Pastrychik at 3:24 PM 5 comments: