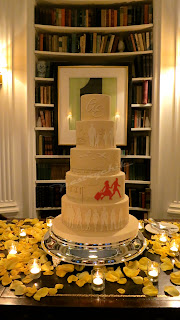 Happy 2013 to all! Hope everyone had a wonderful holiday.

I am going to start this year's post with a wedding cake unlike any other I've done before. Most wedding cakes I've done is inspired by the bride's dress, the venue or the color theme. This wedding cake, on the other hand, is very personal to the couple as each tier tells something about the them.

Starting from the bottom: The bottom tier represents the bride's family, their dogs and their life in the Philippines represented by a horse drawn ride called the kalesa, which used to be the primary mode of transportation. The next tier up is the couple's tier which includes the groom's love for cars (and he was very specific about the shape too!), the proposal and more importantly, their new journey ahead with that aspect represented in red for emphasis. The third tier from the bottom shows the Golden Gate Bridge as the couple got married in the BayArea and starting a new life in San Francisco. The next tier up shows the family of the groom, his triplet nephews and  the family's 2 dogs. And lastly, the top tier is the initial of the couple: AE for Albert and Erica.

Here are some day shots to show clear details. 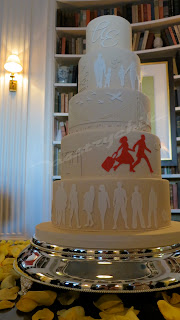 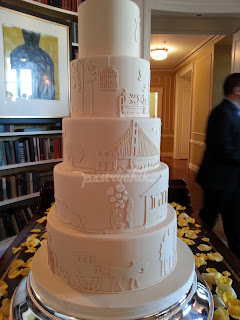 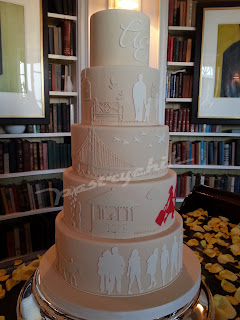 One other thing that makes this cake different from any other I've made is that the idea came not from the bride, but from the groom. He was very specific of what he wants on the cake and we didn't mind as we loved the idea. I say "we" as this was a collaboration with my sister as well who is a graphic designer. She worked with the groom  to put his vision on print while I executed the design in cake.

Albert and Erica's ceremony and reception was at the penthouse of the Fairmont Hotel in San Francisco. The balcony had a beautiful view of the city and a library which reminds me of a small version of Disney's Beauty and the Beast library. It even had a secret door which according to the hotel, was the escape door of Marilyn Monroe and Kennedy (who had an affair according to history) as Jackie was on her way up to the Penthouse. And guess what? The library was for the cake and the cake only for that night. So talk about pressure of making it really nice right?

Congratulations Albert and Best Wishes Erica! Wishing you both a life full of happiness and great adventures.